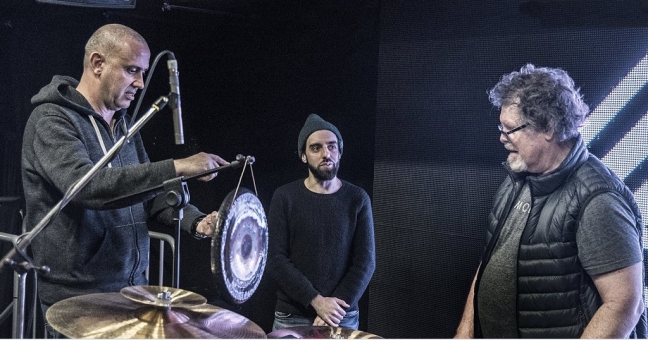 Unpacking the suitcase. It’s very hard to unpack. Why one must unpack? You most likely need to pack again.

I have just got back from the United States, where I have spent all of February working with EchoTest and other brilliant artists. The journey started in California, at the NAMM convention. It was great to play at the Bass Bash in front of many fusion enthusiasts: EchoTest is not a fusion band, and not the typical bass duo, so I felt like we were the black sheep there. But people seemed to be into it. As the years go by, I tend to think of myself as a musician rather than a bass player; I’m just interested in playing and writing music. The bass is a vehicle to play music.

Julie Slick and Alessandro Inolti were headed to Nashville after our quickest NAMM ever, to rehearse with Adrian Belew (they played on the Cruise To The Edge – a prog rock cruise. I’ll leave it at that), and I flew to Dallas, Texas, to work a bit with Nocturne Blue (a trip hop / ambient / uber cool project lead by Dutch Rall). It was my first time in Texas. I’d say Texas is very brown, and wide. Lots of open spaces. The sun shines in a different way – I loved taking pictures at sunset, very interesting colours. It’s funny – whenever I mentioned I was going to stay in Texas, people would go “Oh, I’m sorry, Texas sucks”. Well, I liked it. I played on some of Dutch’s music, and we also worked on a video for one of the songs from Small Music From Broken Windows. I hope I’ll be able to release it soon. In the meantime, you can enjoy this live performance of “The Glimpse”, that I played on Dutch’s wonderful Gretsch guitar.

I left Dallas and took a flight to Seattle. I had such a nice time there last fall, that I thought to go back and stay longer. My body was like “WHAT THE FUCK”, though. Too many time zones in less than a week; not enough sleep, and always a different type of weather… I felt a bit weird for the first few days. However, I pulled it off. I stayed with my friend Dariush and his family in Ballard; I love them. I also spent more time with master-guitarist Anthony Faide, and Steve “does he sleep?” Ball. Steve rented a recording studio for a couple of days to record some collective improvisations. One of the highlights for me was a blindfolded improv session lead by the incredible Beth Fleenor. Also, Trey Gunn showed up one day. He didn’t play any Warr Guitar. He brought a wide array of percussion instruments. There are pictures and recordings of me playing shaker with Trey – this makes me very happy.

At some point, Julie and Ale joined me in Seattle and we worked on the first Seattle Bass Camp ever – it was great fun (and a reminder that I need to practice more). We played an EchoTest show on Valentine’s Day, that I thought was incredibly good and solid. We are tight now… both as a trio (with me singing) and as a quartet, with vocalist Jenny Founds. I love to have Jenny with us, she helps me a lot. We played shows together on the East Coast (including a surreal gig in New York City, at the Rockwood Music Hall. We arrived at the venue 15 minutes before showtime, no soundcheck, small stage, but packed room. We sounded good, I think!).

Before leaving for the US in January, I showcased Small Music From Broken Windows in my hometown, Latina. It was a great concert – much better than I expected. The band includes Alessandro on drums, Enzo Ferlazzo on guitars and Eugene on keyboards and electronics. Here’s a video of “Wounded Heart”, from the gig:

Last week, the day after I returned to Italy, I opened a Stick Men show in Rome, together with Eugene. It was so nice to see Pat Mastelotto, Tony Levin and Markus Reuter again. They’re great friends and it is always a pleasure to cross paths, even briefly. I was playing my set and could see Tony taking pictures from the audience – a great honour, but put some pressure on me. Tony is a living legend! We spent time talking about photography in the backstage. I have just got a vintage Halina compact camera from the 80s, as a gift from a friend, and showed it to him. It works with film – he said, “Good luck!”. I can’t wait to bring it with me to document my future travels, in an unusual way.

I’m now preparing for a live set scheduled for March 24th in Livorno, Tuscany. I will be there performing with Andrea Gastaldello – it’s the debut gig of our electronic project Fifteen Strange Seconds. Not the typical concert for me: I will sing… and won’t play any instrument! I won’t play bass, not even for a minute, for the first time ever. Quite scary, I must say. I feel naked without a bass or guitar on stage. We have been working on an album for the past three years. Will it be released? When? I have no idea! At some point, it will be ready. And I will let you know. Such is life.